Students Use Technology to Speak Their Language 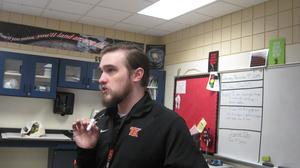 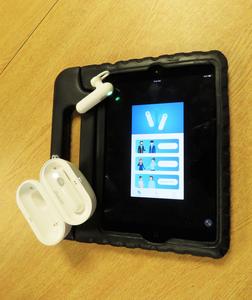 Imagine starting school in a new country where you don’t speak or understand the language. It’s impossible to realize the frustration and difficulties students in this situation have comprehending lessons while trying to master a new language. Thanks to a grant from the Thornapple Area Enrichment Foundation, some TK students will get a little help as they make the transition to new homes, new schools and a new language.

Jamie Lewis, district EL coordinator and teacher, received a grant for two WT2 translators for English Language learners. Mostly, the devices will be used with middle and high school students, but can be used by elementary students if there is a need.

Lewis said she was aware of the devices that automatically translate what a person is saying from English into another language. After talking with other districts already using the devices, she said she wanted to try them at TK.

“We had a student enroll here from Mexico and can’t speak any English at all,” she said. “It’s very hard for them.”

The device uses an app on a phone or iPad. As they are speaking, teachers turn on their device which translates their words from English to Spanish or another language. The student wears ear buds and can instantly hear the translations.

“It’s pretty accurate in the translations,” said Lewis. “I think it’s going to help students especially in the middle school and high school.”

Lewis said the primary goal is to get students acclimated to speaking English, but if they have no base knowledge it’s very difficult and takes time. While learning, the translation device can be used for assistance.

“This just gives us another tool we can use especially where they come and have no grasp of the English language at all,” she said. “It’s overwhelming for them.”

EL teachers assist students in some classes, but they can’t be with every student in every classroom.  Lewis and other EL teachers work with about 15 students every day. Most of those students speak Spanish.  Lewis said there are about 90 TK students who consider English a second language.

“I’m so thankful we have these.  It’s going to take a little getting used to for both the teachers and the students, but I think it’s going to be something very positive to help students as they learn English,” said Lewis.