TKMS Student is Local Winner in America & Me Essay Contest 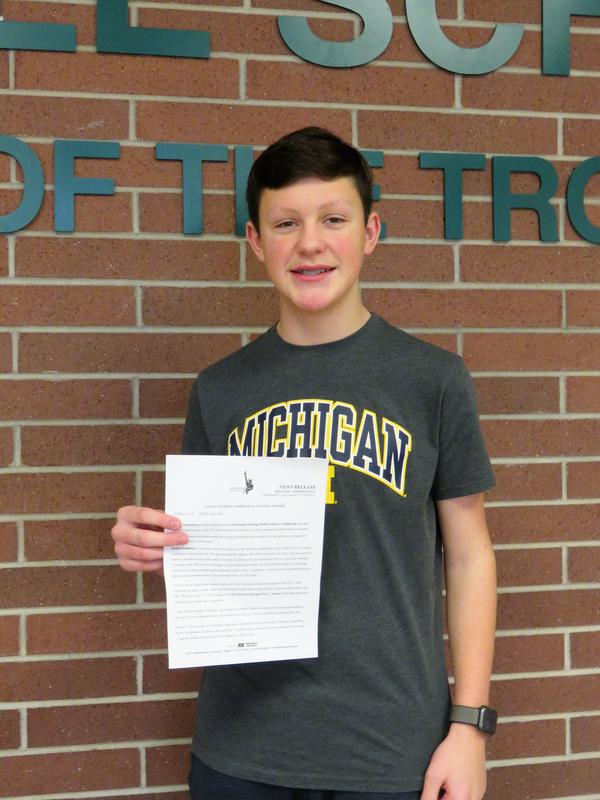 Kaden Hamming is a local winner in the America & Me Essay Contest sponsored by Farm Bureau Insurance. With this year’s theme “My Personal Michigan Hero” in mind, Kaden wrote about his cross country coach, Maggie Wilkinson.

“She helped me a lot because I wanted to get better times and she really encouraged me and helped me,” said Hamming, an eighth-grader at TK Middle School. In addition to coaching Wilkinson also teaches math at TK High School.

Kaden is the son of Keith and Linda Hamming. He said the essay was pretty easy to write since it was about someone he felt really took time to help him.

Kaden runs cross country and plays baseball and basketball. Next year in high school he said he plans to try football. His favorite subject in school is math and he also enjoys reading.

Hamming will receive an award certificate for being a local winner and his name will be engraved on a plaque for permanent display in the school. His first-place assay will advance to the state level competition. From there, the top 10 essays in the state will be selected. Those winners will be announced in April and each will receive a plaque, medallion and $1,000. The state winners will also be honored at a banquet in Lansing, meeting with some of Michigan’s top governmental leaders and be the featured guests at a Lansing Lugnuts minor league baseball game dedicated in their honor. Each school placing a student in the top 10 will also receive $1,000.

Kaden said if he’s fortunate enough to be selected as a state winner, he will put the prize money he earns toward his college education. He hopes to attend the University of Michigan in the future and is considering some kind of career in finance and investments.