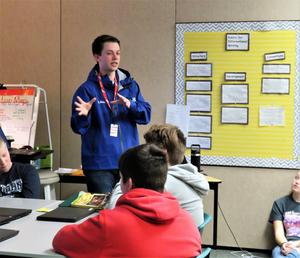 WOOD TV 8 weather intern Blake Harms visited TK 7th grade career exploration students last week offering an inside look at his job and advice for students as they start thinking about careers. “The best advice I can give you is to learn something new every day,” said Harms. “I don’t know it all, but I can certainly learn something every day – even if it’s just a little thing. You never truly know it all.”

Harms is a student at Valparaiso University in Indiana where he is studying meteorology and hopes one day to have a full-time broadcasting career. He is a Hudsonville graduate and said he has always been intrigued by the weather.

Harms said he began working as an intern with WOOD TV 8 last summer and he thanks his use of social media for helping him get his foot in the door. In 2013-14 he created a website to predict school closings based on weather information. It caught the attention of WOOD TV 8.

“Use your social media for good. If you do, it can help you,” said Harms.

He said this winter’s forecasts were challenging. “There is a crazy difference in winters every year,” he said. “This year was especially challenging because of the temperatures changing so much. One or two degrees can make the difference between snow, freezing rain or just plain rain,” he said.

He said Grand Rapids in the hardest city in the country to predict the weather because of Lake Michigan and the effects it can have on our weather here. “It’s a wild card,” he said of lake. “It’s hard to predict what it will do.”

He also told students it’s important for them to make good first impressions and treat everyone with respect. “Be nice to everyone and treat everyone the same. You never know when someone is going to be your boss or the person who gets you in the door for a job. Be nice,” he said.

While he’s interested in becoming a broadcaster, Harms told students there are several avenues a student majoring in meteorology can take. He said some work for the National Weather Service. There are also companies like insurance companies, airlines and even large construction companies who hire meteorologists to predict weather patterns for them.

Harms said being a broadcaster is what he’s always wanted to do and hopes he will get the chance to come back to West Michigan.

Harms also told students to look at the universities carefully to see what career options are offered. “There aren’t a lot of universities offering this degree,” he said. “I chose Valparaiso because I wanted a smaller school where I could have more access to working directly with professors. I’m not the best at math and I knew I was going to need help. I let myself know it’s OK not to get an A in every single class.”

He said Valparaiso’s meteorology program has also produced several successful broadcasters including Ginger Zee who is now a chief meteorologist with ABC News and Ellen Bacca who is now on WOOD TV 8.

Harms said he’s very excited about his future and knows he will have to keep learning every day. “The only person who can get in the way of what you want to do is yourself.”