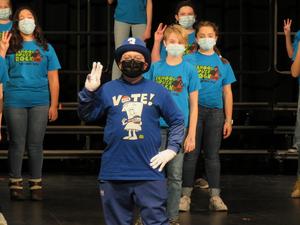 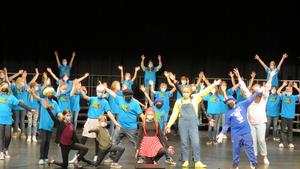 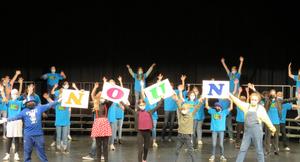 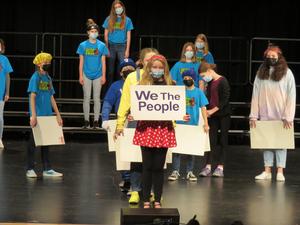 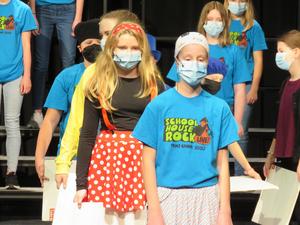 Laura Oprea and her middle school musical cast knew on the first day of practice COVID-19 could at any time force them to abandon their production and cancel their performances. It very nearly happened just two days before the three-night performances of “Schoolhouse Rock Jr.” were scheduled to run.

“I’m thankful we still got to perform. It kind of made me feel like we can do anything and just made me a lot more confident,” said Treyson Rounds.

Oprea gives all the credit to the students. “Kids are resilient and flexible. They just go with the flow and made it work. I think they learned that even during difficult times we can do hard things,” she said.

TK Middle School Principal Kelli Wegner said she also believes students took a lot away from their performances. “We want to teach our kids life skills and adaptability is an amazing skill to have. They proved they can adapt and be successful.”

Ever since practice started in September, several precautions were instantly implemented. To have fewer students on stage, the play was always planned to be divided into three performances. The lead cast would perform each night, but the grade-level choirs would change for each performance. The shows were scheduled for Nov. 17, 18 and 19 with a limited audience.

But on Sunday night, just two days before the first scheduled performance, Oprea and her choir and cast feared the worst. All high schools were ordered to close Nov. 18 and it was uncertain whether other schools in the district would follow the same mandate.

“When I heard the high schools had to close I thought, ‘we’re in trouble,’” said seventh-grader Reese Braska.  “I’m very thankful we got to do it.”

By Monday afternoon, students learned the middle school would stay in session through the week, but the performances were still in question. With the high school closing, students thought they might have to perform in the middle school to an empty gymnasium and with the new mandates there likely could be no audience at all.

Oprea said she went to Plan B, C and D to get the show on stage.  She made sure Live Streaming would be done so families and friends could watch at home. Arrangements were made to do all three performances Wednesday during the day in the high school auditorium. Then she found out one of the lead cast members wasn’t going to be able to attend in person so, with the help of the TK Tech Department, a Zoom meeting was set up so the student could have limited virtual participation.

Eighth-grader Noleigh Lampton learned Monday afternoon she would have to take over solos originally assigned to the student unable to participate. “I had less than two days to learn the song and some other parts,” she said.

The lead parts were distributed among other cast members as well, giving them very little time to prepare.  All students had to sing through their masks during all performances and they were socially distanced on stage as much as possible.  Hardest of all, the lead cast had to perform three nearly 45-minute shows in a row.

“I was really tired by the last show,” said Lampton.  “The masks and the lights made it hot on stage.”

Avery Hagemann said performing without an audience was also a little weird. “It kind of felt a lot like a practice. But we did it three times in a row,” she said.

Jacob Newland said even without an audience, he was very happy the shows were allowed to go on. “I look at it  like something I read, ‘Don’t be upset it ended. Be happy it happened.’”

Others agreed. “You can’t mad about what happened, you just have to roll with it,” said Montana Baker

“We’re lucky we still got to do this,” said Ali Bolt. “It would have been hard if we didn’t get to after all the work we’ve put in.”

Oprea thanked the many TK staff who helped make the show possible. “Wednesday’s performances would not have been possible without the help of so many people. We have a wonderful community at TK that helps each other out and I am so thankful for that.”