TK Teachers Honored for Going Above and Beyond 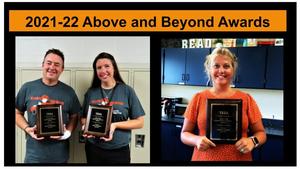 Three teachers were honored with the Shelley Erb “Above and Beyond Award” given annually by the Thornapple Kellogg Education Association. Erb is a retired first-grade teacher whose endless energy and enthusiasm for teaching is the inspiration for the award given annually to a teacher who goes above and beyond what’s expected.

“Being awarded this Shelley Erb Above and Beyond Award is a true honor,” said Mark Hagemann, TK Middle School band director who introduced the award at the TK staff opening day celebration.

This year, three English teachers were selected for recognition - Amy Forman and Scott Aldrich from the high school and Laura Nikkel from the middle school. Co-workers who made the nominations presented the awards.

Amy Forman - Kevin Kane said he nominated Forman for her work ethic and positive attitude. “Amy is always willing to help out staff, students, community members - anybody that asks - and she always has such a positive attitude when she does it,” he said. “We asked her to help out with a couple of yearbook things last year and she actually thanked us for asking her.”

“We’re grateful to have her in the district and especially at the high school,” said Kane.

Forman has worked in education for nine years. In addition to teaching, she is also a National Honor Society advisor for the district.

Scott Aldrich  - Aldrich has been an educator for 16 years. Erin Kraker nominated him for the honor calling him “a force of good desperately needed in education.”

“He takes so much initiative to bring real life into his classroom and prepare students for their futures. He seeks out opportunities (for his students) and is never satisfied with mediocrity, stagnancy and injustice in their lives.”

She said he also teaches his students about empathy, compassion and self-advocacy. He values the importance of mental health and helped advocate for mental health awareness throughout the school.

Kraker said Aldrich not only cares about the mental health of his students, but also cares about his fellow teachers and takes time to make sure everyone is doing well.  “I can say I don’t think  I could have made it through last year without him,” said Kraker. “He inspires me to be a better teacher and a better person. Scott makes our district an empowering, safe and an empathetic place.”

Laura Nikkel - Nikkel has been in education for nearly 20 years and last year joined the virtual team of teachers for TK middle school students.

Chelsea Hall said she has learned from and been inspired by Nikkel. “It shows true grit to look at a barrier like COVID and always seek out the next solution. She never once looked at that barrier and felt defeat. Instead she found a different route that worked for each student she serviced. She always made things fun and interactive for her students even while learning from home,” said Hall.

Nikkel is a leader with the middle school student council and helped organize teacher and administrator appreciation activities. She also organized ready-made meals and deliveries to a co-worker who was out sick for an extended period. “She has shown selflessness over the course of this past year and many years prior,” said Hall.

Nikkel also has been the director of high school musicals for many years. Last year during COVID, she led students in musical performances of  “The Addams Family” with two full casts. This gave more students opportunities to be involved while still maintaining COVID safety protocols and keeping the number of students gathering to a minimum.

“There are not enough words to express how much she has gone above and beyond. She is not only a good teacher and leader but, even more, she is good people,” said Hall.