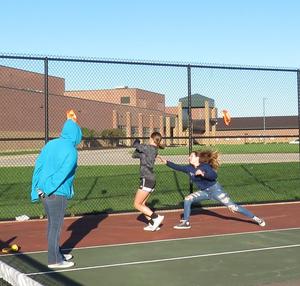 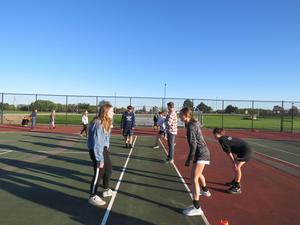 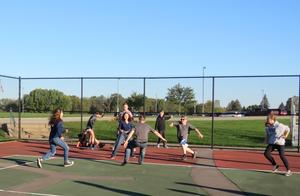 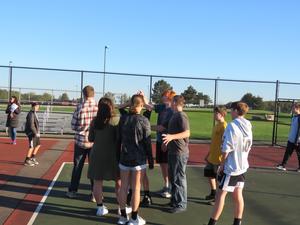 Students lined up facing each other, both sides eying the opponent’s flag hanging on the opposite side and strategizing ways to successfully grab the flag without being caught themselves. TK Middle School teachers turned this simple children’s game of Capture the Flag, into a live-action history lesson as the 8th-grade teams became the British and American forces in the Revolutionary War.

Teacher Stephanie Langschied explained there would be six total rounds and new rules would be applied for each round  - depicting the significant changes in the war. The Red Team (representing the British forces) started out with all the advantages. Students stretched and jogged in place to prepare for battle. They gained additional players halfway through the round while the Blue Team  (Americans) did nothing to prepare and had no reinforcements.

“It was pretty one-sided in the beginning,” said Langschied. “So, how did the Americans eventually win against the best Army and Navy in the world? The Red Team had all the advantages to start. They were prepared, they knew how to fight, and they had all the equipment.”

As the game progressed, rules changed giving the Blue Team a big incentive to win, just like the Americans had the incentive of the Declaration of Independence for winning the war. The Blue Team got pep talks and encouragement while the Red Team didn’t get any.

By the fourth round, the Blue team gets an even bigger advantage - they don’t have to capture the flag to win the game - they only have to keep the Red team from capturing their flag. On the other hand, the Red team had to capture all three of the Blue team’s flags. Historically, Americans realized they didn’t need to defeat the British, they only needed to keep the British from capturing and defeating them. Students realized the rules were becoming lopsided.

“It started out really unfair for the Americans, but slowly over several battles and time, the advantages shifted,” said Langschied, reviewing the lesson.

In the fifth round, members of the white team join the blue team representing the French forces joining with the Americans and finally giving the Americans a much-needed advantage. In the final round of the game, the Red Team was asked if they wanted to continue with the odds heavily stacked against them symbolizing the shift in the war and the eventual end. Some students, just like some of the British troops, were ready to quit.

Langschied said using the game is a memorable way for students to understand the Revolutionary War and realize how the advantages shifted to favor the Americans and eventually end the war.