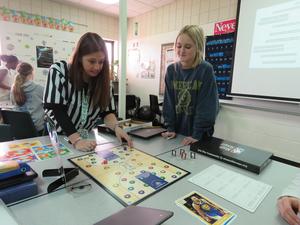 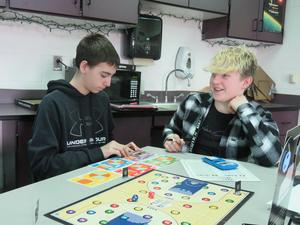 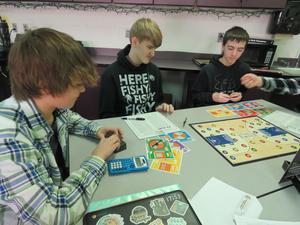 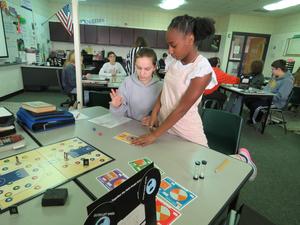 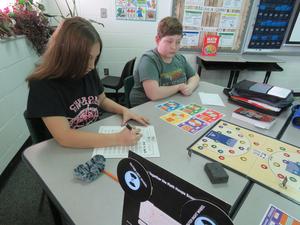 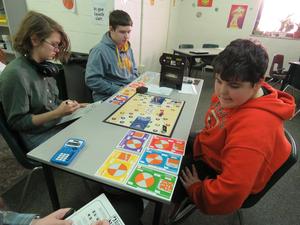 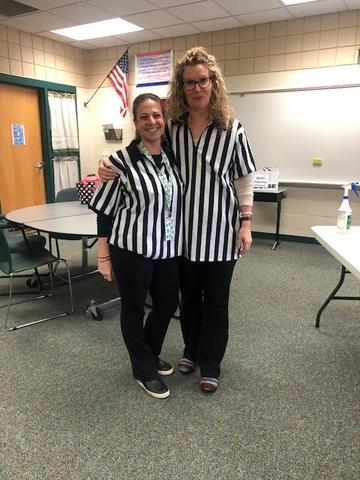 “Yeah! Another 3 pointer!” yelled an excited student across his 7th-grade classroom as he tossed his arms in the air.


“I never thought math could be fun but this is It keeps my brain working and it helps me remember my math. The game is math, but it’s also fun,” said Kane Mosley.


Teachers Carmen Skiba and Luann Schnur have started a pilot program called NBA Math Hoops, sponsored by Learn Fresh in partnership with the NBA and WNBA.  It features a board game and curriculum using real NBA and WNBA players and stats to re-enforce fundamental math skills of addition, subtraction, multiplication and division. Students learn how to convert fractions to decimals and percentages and then use this information to calculate and evaluate players' shooting average. Students then drafted their own active NBA and WNBA players to form a team.


Once teams are set, students have cards for each of their five team members showing their shooting percentages. As they work through the game, strategy is involved to decide which player should take the shot based on the percentages and the location of the shot.


The game also reinforces fundamental math skills like addition, subtraction, multiplication and division. Students are allowed to use calculators to figure percentages. The game includes ways for players to foul and steal the ball as well as shoot free throws along with baskets from different locations on the floor.


Students have been practicing the game after drafting their teams. Now the two-player teams are playing against other classroom teams in a tournament bracket.


“We see students who are struggling with fluency in basic math. This makes practicing those basics fun and relevant,” said Skiba.


“I like it because it makes math fun,” said Marissa Rowley who admits math has not always been her favorite subject. “It makes people want to do math now and helps practice our math.”


Isla Tillema drafted Steph Curry as one of her first players. “I love everything about this game. It helps me refresh my math skills and I like basketball a lot,” she said.

Mason Smith laid his Ohio State Buckeye folder on the table next to him before he started the game. “I think it’s cool that we get to play this and it’s really helping with math,” he said.

Noah Green said playing the game is much more fun than most math lessons. “I like to do math like this,” he said. “It just makes it more fun and you still have to do math. It doesn’t feel like school work.”

Grady Galaviz wore his L.A. Warriors jersey on game day. “It makes you think about math but you don’t feel like you’re really doing math. It helps us with muscle memory to remember our addition, subtraction and multiplications,” he said. He also clarified that although he wore the LA jersey, he really liked the Boston Celtics.

Keionna Lewis said she loved everything about the game. “It’s so much fun and it helps me practice my math at the same time.”

Schnur said the program has been a big hit. “It’s exciting. Even my reluctant learners are having a blast and it is nice to see a “math” spark in them. It’s been really fun to watch all my students.”

Teachers also talk to students about sportsmanship in competitions. “I see kids encouraging each other and really having fun” said Schnur. “It makes math exciting and relevant. Math is everywhere.”