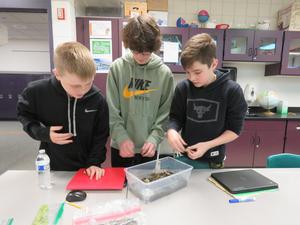 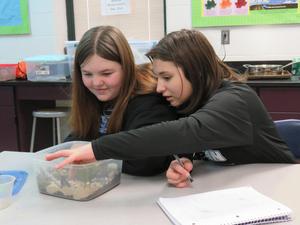 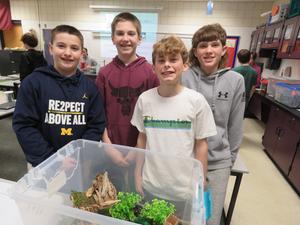 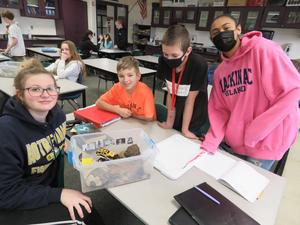 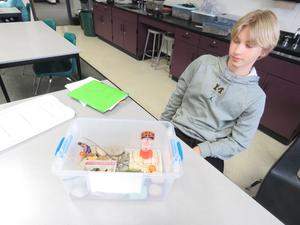 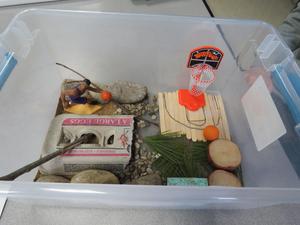 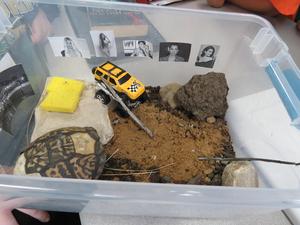 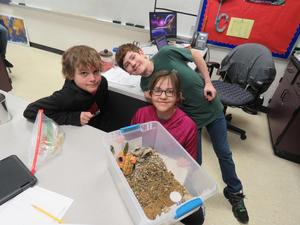 What do grass, twigs, dirt, Monster trucks, the Cookie Monster, basketball courts and Kardashian photos have in common? They’re all parts of cricket habitats created by TK seventh-grade science students.

It’s part of a project students are doing this spring in science classes of Mr. Cole and Mr. Rynearson after learning about habitats and ecosystems. Putting their knowledge to the test, they had to research habitats for crickets and then create their own habitats. Each team of students received five crickets to live in their habitat for as long as possible.


“We had to do research to find out what crickets eat and where they live,” said Lea Bouwman. “Then we had to find a container and build a habitat where our crickets can live.”


Most of the habitats included grass, leaves, twigs, rocks and dirt. Some used sponges for water sources, others added miniature ponds. Some teams took their habitats to new heights adding basketball courts where crickets could get some exercise, Monster trucks for the insects to hop on, and even a penthouse lined with photos of the famous Kardashian family.


Caleb Miller said he thinks his team thought of everything. “We have dirt, grass and leaves. Food is most important so we have fruits and vegetables for them like bananas and apples. They need somewhere to hide so we added some rocks and we have a sponge for water.”


Andrew Johnson, Alex Hildabrand and Parker Zube said they like this project because it’s something they can build together. “We are learning about the ecosystem and the habitat they need to survive.  Crickets are important because they eat other insects and they are food for bigger insects,” said Johnson.


“Water is the most important thing they need,” said Hildabrand.

Elliot Neff and his partners built a basketball court complete with a miniature hoop and ball where the crickets can work on their jump shots and dunks. “They need to be able to jump around on things,” said Neff. “They can’t just sit around all day.”

Leighton Leslie and Hunter Seaben added Sesame Street characters Elmo and Cookie Monster to be friends with the crickets and Easton Sytsema, Caleb Chatman, Max Durkee and Logan Goggins built their habitat to resemble Shrek’s house. Why?  “Because it’s the best movie ever,” said Easton.

An upside-down pineapple shaped house with a disco mat replicating Sponge Bob’s pad was created by Heath Nagel, Evalyn Archambault and Preston Stevens. “They have everything they need,” said Heath.

Students will evaluate their habitat and do some remodeling if necessary. After one week, only one team has lost all of their five crickets. Several still have multiple crickets and a few still have all five crickets alive. Students will measure the mass of their crickets to see if they are growing and thriving in their habitat with all  information being recorded in an online document.

Eventually they will determine why their habitat either was successful or failed for the insects. Crickets surviving until Spring Break will be released outside into their natural habitat  - but they might miss their Monster truck, basketball court and Kardashian mansion.