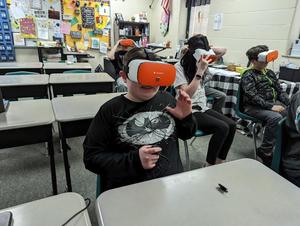 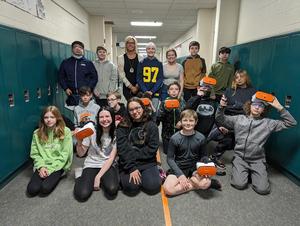 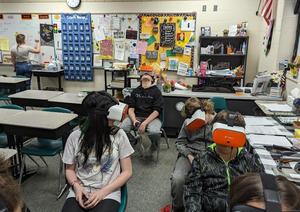 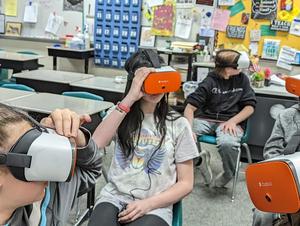 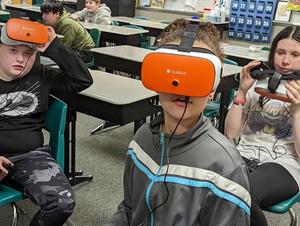 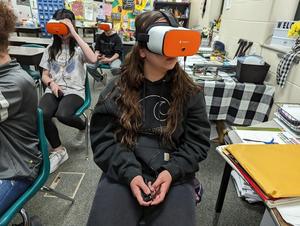 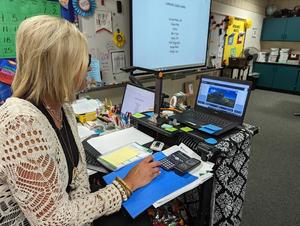 Madilyn Vandenboss and Memphis Miranda-Wells didn’t feel like they were in their Thornapple Kellogg Middle School classroom any longer. Instead, they were transported to a Japanese garden filled with vivid pink and white cherry blossoms all around and above them.

The trip wasn’t real of course. But the virtual reality headsets made it feel as if the students were actually in the Japanese garden.


“Ooh, it’s so pretty,” said Miranda-Wells as she spun her head around and around looking in all directions. “It’s so cool.”


Another student tilted his head back with the headset on to get a better look at the canopy of flowers hanging from the branches overhead.


The trip is just one of many opportunities for students as they begin using Virtual Reality headsets and programs as part of Mary Francisco’s exploratory computer class. Thanks to grants from Great Lakes Energy, Thornapple Area Enrichment Foundation and the Wilson H. Craig Fund through Barry Community Foundation, Francisco purchased eight headsets with hand controllers. She also gets a library of educational explorations for students.


“There’s so much available,” said Francisco, who can see on her computer exactly what each student is viewing and doing on their virtual trip. The library of excursions offers a huge variety - from exploring the oceans, outer space and ancient ruins in European countries to getting up close with animals in Africa, feeling like they’re in a Japanese garden, or gazing up at the Northern lights.


Francisco said right now she’s just giving students experience using the VR headsets. Ultimately, she will use the virtual programs to tie in with lesson plans and additional learning opportunities for students.


“I think it’s going to be really great,” she said. “The kids love them and they are excited about being able to see different places in the world.”


Vandenboss said she enjoyed viewing the northern lights. “I don’t know if I would ever have a chance to see them without this,” she said.


Madylin liked her virtual trip to Africa where she could see the elephant, dessert and Mt. Kilimanjaro. “I’m really excited we get to do this. I’ve never done this before.”

Kaylin Thomas said she would like to explore Asia. “I just think it looks like a neat place,” she said. “I like using them (VR headsets) because I get to see places I’d never be able to see otherwise.”

Many of the middle school students have never experienced virtual reality like this before and admit it takes a little bit of getting used to. “It feels like you are really there,” said Thomas.

Chase Meek and Jackson Hasty said they’ve used virtual reality headsets before playing video games, but they also enjoy using them in the classroom with the educational experiences.

“I like the videos better than just the pictures. You feel like you are really there walking around and moving,” said Hasty.

Hasty said he would love to go on some virtual roller coaster rides. He and Meek both said they would also like to take a virtual trip to Machu Picchu. “It’s just like nothing else in the world. It’s so unique,” said Meek, who's seen pictures before, but the VR will give him a chance to feel like he’s staring up at the mountain and the lost city from the Inca Empire.

Cris Flores-Diaz said he wants to visit New York where he thinks he will enjoy the hustle and bustle of the big city.

“As a middle school computer science and math teacher, I believe it is important to expose my students to different forms of technology and help them understand how technology works, ways it is being used in the world today and effects it will likely have in the future,” said Francisco

Virtual reality is a growing technology already being used in a variety of ways in different professions including the healthcare industry, engineering, marketing, film and entertainment, gaming, automotive and construction.

“I’m excited. And I know my students are excited about it,” said Francisco. “Some of these students may never get to the Grand Canyon or the rain forests.  But these programs don’t just show them pictures of these places, they make them feel like they are really there. It’s a great way for them to explore and learn about their world.”