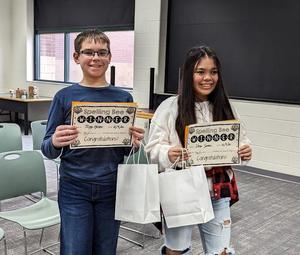 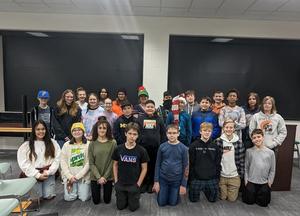 It took nine rounds of spelling before a champion and runner-up were crowned in the annual Thornapple Kellogg Middle School spelling bee today.


There were 26 students who competed in the schoolwide spelling contest. By the sixth round, only four remained - Gehrig Burghardt, Matthew Spurgeon along with Helzer and Sonza.


Sonza had a chance in the sixth round to win after her three competitors in that round all misspelled their word. She correctly spelled her first word but missed on her winning word sending the contest on for another three rounds.


Both Helzer and Sonza will represent TK Middle School in the regional spelling bee early next year.