Students Thank TK Board of Education 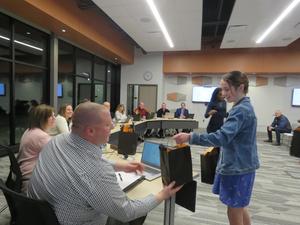 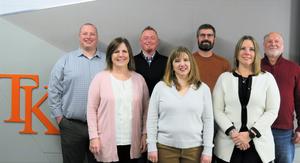 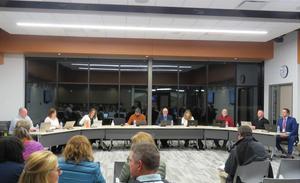 Two Thornapple Kellogg Middle School Student Council members addressed the Board of Education Monday night offering thanks and praise for all they do to make the district the best it can be for all students.

“We want to thank you for your time, energy and efforts,” said Meghan Skidmore, an eighth grader who was joined by fellow student council member, seventh-grader Exley Roon.


They presented each of the board members a goodie bag as a token of appreciation from students for the work being done.


The Board of Education is made up of seven elected members. These members serve terms from six years to two years. They meet as a board monthly. Board members also are involved in local and state government to work with legislators. They have the opportunity to take an abundance of training so they better understand their role as a school board member.


This year, Thornapple Kellogg Schools welcomed two new board members at the first meeting in January. These new members were elected in November. Tyler Wenger and Derrick Brock will each serve six-year terms, while Brenda Hess also was elected in November and began serving in December. She will serve a four-year term. Krissy Hooson was re-elected to a two-year term.


Other returning board members are David Smith, Anne Hamming and Matt Powers. January is also the month when the board elects officers for the coming year. Powers will retain his seat as the board president with Hooson named vice president. Smith will continue as treasurer and Hamming will retain her duties as the board secretary.