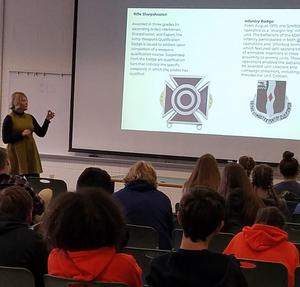 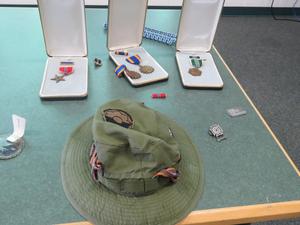 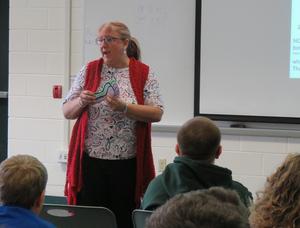 After hearing real-life war stories from Vietnam, Thornapple Kellogg Middle School students will launch their own effort to honor and remember all veterans.

TKMS social studies teacher Rojean Sprague has helped coordinate the program each year for the eighth-graders. "It's important that they realize the sacrifices veterans make and just to get them thinking about it," she said. "Even when the veterans come home and their time in the service is done, it can have effects that last the rest of their lives. I want students to have a sense of appreciation and pride."

Nikkel told students about her father, Steven Roelofs, serving in Vietnam after being drafted in 1969. She shared a video of the lottery draft selection process aired on television while families sat on the edge of their seats waiting to see if their numbers would be called.

She said she remembered going to see the movie "Forrest Gump" with her father in the movie theaters after his service and she remembers him saying the scenes from Vietnam were very accurately portrayed.

"There was a time when he walked in the rain and the swamps without taking his shoes or socks off for 46 days," she said. "Imagine what your feet would feel like."

She said soldiers were instructed not to remove their shoes or socks since they never knew when they might have to move out on a moment's notice.

Nikkel shared letters her father wrote home to his family and noted how he always told his parents not to worry about him. "Everything is OK here, so don't worry about me," was a common finish to many of his letters.

She talked about the dangers of Vietnam beyond enemy fire. There were poisonous snakes she said her father referred to as the "two-stepper" snake. "If soldiers got bit by one of these snakes, they took about two steps before they were dead," she said.

Her father was stung by a scorpion and was out for six days. Combat in the jungle was difficult and different than anything Americans had encountered. The government started using a chemical called Agent Orange to help remove some of the jungle growth. At the time it was thought to be a safe chemical, but years later was discovered to be a leading cause of an aggressive form of cancer.

Nikkel's father died of that form of cancer at the age of 63. "He was exposed when he was 19 years old  and it still affected his life years later."

"Veterans Day is important because of the precious freedoms that we take for granted every day. Saying "thank you" to a person in the military is a very small price for our freedom," she told students.